Parts + Labor was created by Paul Korolenko and I for Ludum Dare 37.

The theme for this LD was “One Room”. We played around with many ideas and 6 hours into the dare we finally came across the idea we thought was a winner. Interestingly, it was not Parts + Labor. We had decided on creating a game where a player manages a library. Customers would check books in and out and the player had to retrieve them and put them back where they came from. We ended up plugging away at this idea for the better part of a day before we realized that it just wasn’t what we wanted. We wanted more action, more player decisions, more critical thinking, something friendly to players of all ages/languages, and most of all we wanted the game to be fun. Library Simulator (working title) was not fun. So, we scrapped all of the code we had been working on and started from scratch halfway through the first day of LD37. We decided that one of the best ways to figure out what we wanted to make was first to decide what we didn’t want to make. So we started looking at other Ludum Dare update posts. We noticed a trend of room escapes, simulators, zombie games, twin-stick shooters, and other common tropes. We then took all of our ideas (we were keeping a list) and placed them into groups that were the same or similar to the groups of games we didn’t want to make. What was left was a simple management game. We decided that instead of the typical management game we were going to make it more action based. Once we had that made we thought that it was too simple. So we decided to throw a wrench at it and make it a real-time multitasking management game. The result was Parts + Labor. Please take the time to check it out. You will find a link for both the standalone and web version at the bottom of this page. Thanks for taking the time to read this and thanks for playing! 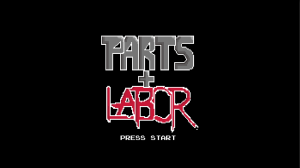 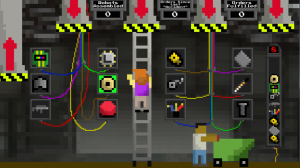 The year is 3092. Robots have taken over the human race. Humans are still around as long as they’re useful to the robots. You play as two workers in a robot manufacturing plant. Maintain efficiency in order to build the most robots and please your robot overlords! Play by yourself for a challenge or team up with a friend!