This was a project for the Aesthetics and Immersion class at FSU.  During the project we were asked to create a character, develop a UI, and then create a final effect that the character would use as their finishing ability.  The character we were tasked with creating was supposed to represent ourselves as a game character.  We also had to make any armor or clothing the character was wearing represent the game style we were aiming for.  I choose a 3rd/1st person shooter genre.  My character turned out as an angry mercenary who accepts assassination contracts. 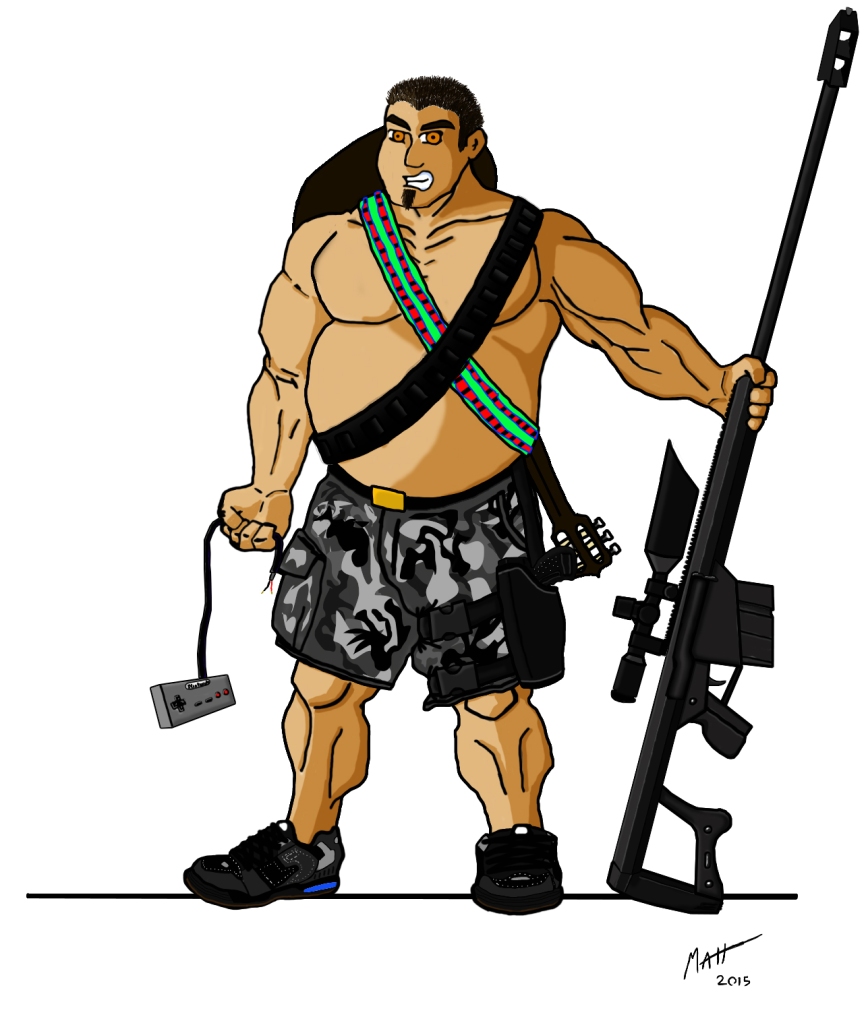 As the project continued I was asked to create the UI layout that I would expect to use with the character in the game.  What I came up with was a bit off if I say so myself.  I wanted a high-tech UI similar to games like Deus-Ex or the much anticipated game The Division.  Unfortunately I am not terribly familiar with all the ins and outs of Photoshop just yet, so My UI was a bit, well, rough.

After creating the UI we were finally tasked with creating the special effect that the character would use as their “final ability”.  Since my character was using guns I didn’t really want a magical effect so I decided on creating a firing effect for my characters main weapon.  In order to achieve the effect I desired I decided to try my hand at Maya.  I created my first ever 3D asset: Zeke.

That asset required motion and textures to create the firing effect and so I ended up creating custom textures to be used with a particle system in Unity 5 that I created from scratch.  The textures I created were used to aid in the realism of the gun firing effect.

The textures were applied to the particle system and had greyscale set as their transparency.  The color was reduced to greyscale so that the color of the effects could be added in in Unity.  The bullet texture is an exception.  It was taken from stock photography of .50 caliber bullets and then sized, trimmed, and cleaned up to serve as a particle that simulates bullet ejection from the weapon.  The nice thing about it is that it didn’t require me to create a 3D asset that would be instantiated. I simply spawned a low quality asset that utilized collision to seem as if it was a solid object. I then created the effect, animated and textured the rifle, created a small terrain, placed the UI over the cameras in the scene, scripted the events, and brought it all together.

Finally I compiled everything and created a standalone launcher for the game to be played and viewed.  While it is not a complete game by any means it definitely served its purpose as a learning experience and I walked away with increased knowledge about programs like Photoshop, Maya, Unity 5, and even a bit of audio editing.

Here is the demo if you want to try it out for yourself.

If you made it this far, thank you.  I hope you saw some things you liked and found something here that was useful to you!