In this game, players combine groups of three shrubs to create more complex structures. Players attempt to build towns and villages using the combination of threes to upgrade structures. Additionally players have a point goal they need to reach in each stage before they can move on. Players are provided with different objects to drop on the screen that alter the way the game is played. For example players can be given a bear that moves around randomly on the screen blocking the player from dropping shrubs or upgrading certain objects. There are items like crystals that allow the player to receive a free combination bonus and there are also robot items that allow a player to clear a used spot on the game board. Between stages the player is able to purchase items and decorations from the store. These can be used to upgrade the player’s home (like Farmville).

The game has a lot going on within its play screen. Starting in the top left corner we see two buttons. The first is the players Capital City, next to it is the options button. Top center is the player’s current score and in the top right is the progress bar showing the percentage completed for the current level. It also shows the total amount of points needed to upgrade to the next town type. Below that is the player’s money followed by their inventory. Players can purchase items from the Item Store that will appear in the inventory slots. In the bottom left corner notice the combination formula. Depending on the spot that the player is currently highlighting and the type of tile they are holding a combination will be displayed. This is used as a player aid so that they don’t have to remember all of the combinations in the game. On to the main part of the screen; here in the left most 2/3 of the screen we see that the game consists of a 6×6 grid that has many different types of tiles on it. The tile being selected by the player is shown with the black border and darkened background. 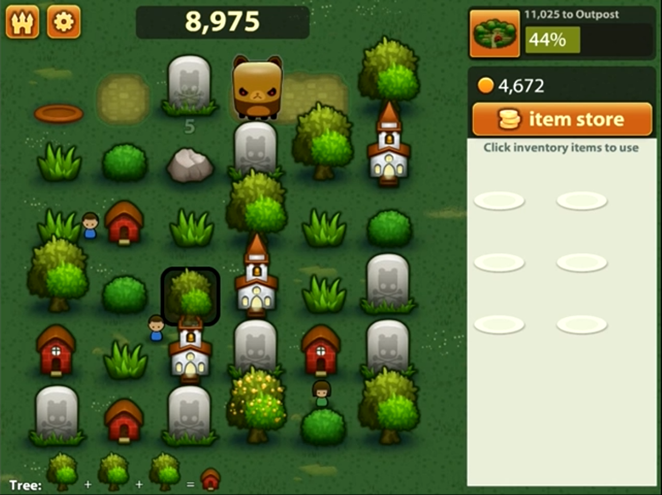 This game makes me think of how Farmville should have been. In other words, it should have been an actual game that one can play rather than a farming simulation, which, let’s face it, is hard pressed to be called a game, since all you really do is sit around and wait for crops to ripen or spam your friends to give you gifts (That may be too harsh a representation).

This game makes me think about what other types of game combinations would be fun together? A Racing MMO – FPS Farming – who knows? It also makes me wonder what types of gameplay can be taken and turned casual or puzzle based. What about a sort of chess/FPS/puzzle hybrid where the player has to match units against enemy units that have countering abilities. Like a sniper can kill a soldier, a soldier can kill a rocketeer, and a rocketeer can kill a sniper. Paper – Rock – Scissors style but tactical, and puzzle based. It would be a puzzle because the battlefield would be set up in such a way that the player would have to clear the field with a limited number of personnel.   Hey, it could be fun.