Titanfall is a FPS in which players battle each other in multiple game types. This includes CTF, Hard Point Domination, Pilot Hunter, Attrition, and Last Titan Standing. Players engage each other in teams of up to, but no more than 6 vs. 6. Killing enemies or NPC’s provides the player with a discount to the time required to call in a Titan. Once players have killed enough enemy units or they have waited out the titanfall timer they may call in a titan, a vertical mechanized tank, to enter and pilot. Once in a titan any enemy units a player kills reduces the titan’s ability core. Ability cores boost a titan’s shields, damage, or movement capabilities depending on the type of titan the player is using. There are three types of titans: Ogre – Slow heavily armored titan with the shield core ability (increases defense), Strider – Fast lightly armored titan with the dash core ability (increases mobility), and the Atlas – Medium speed, medium armored with the damage core ability (increased damage). The titans can be personalized by selecting weapons, abilities, kits, and artillery. Just like titans pilots can also be personalized. The game employs a combination of genres into to create its unique feel. The genres are military shooter, mech combat, and parkour style movement mechanics.

Titanfall, like many fast paced combat shooters, has a lot of data that needs to be managed at any given time. Starting with Figure 1 we can see the mini-map in the upper left corner. The mini-map functionality is similar to Battlefield in that, players and enemies are not visible unless they are firing their weapon. This is combined with the Halo style mini-map for the NPCs which are always shown and are more obvious when they are moving. In the upper center of the screen we can see the titan life bar. Notice the six thick sections below the six thin sections. The thinner part represents the titan’s outer shield. The shield discharges before the titan begins taking physical damage, which is represented by the six thicker bars. If the six thicker bars are depleted the entire indicator will become a black and yellow striped bar, this is known as doom. Just under the health meter there is a small orange bar, this is the enemy health meter, it only shows up when a titan is targeted and will remain until a new titan is targeted. On the right side of the screen you can see the orange, white, and teal text. This text is the player death data. It reads from left to right [This Player – Used this Weapon – To Kill This Player]. The color of the text identifies whether the players are enemies or friendlies. Enemies are always in orange text and teammates are always in teal text. On the bottom right corner of the screen you see a hexagon with a couple of broken up rings circling a smaller hexagon. This is the titan’s core ability meter. It counts down like a clock until it can be activated. Directly to the left of the ability core we can see the currently equipped weapon and the ammo available in it. Slightly to the left of the weapon we see a small white bar and the letter F, this is the titans Artillery slot, when the white bar is full the artillery is ready to fire, otherwise it is red and will slowly recharge. Moving further to the left we see a small shield with another white bar below it, this is the titan’s activated defense ability. This can change depending on the load out a pilot chooses for their titan. Finally in the far left corner we see the game timer and team scores. Again the enemy team is represented by the orange bar and the friendly team is blue/teal. The bars fill up as the goal for the round is completed; first team to fill the bar wins. Figure 2 shows a pilot performing parkour maneuvers with the assistance of his belt rockets. When a player utilizes his belt rockets they become increasingly visible to enemy titans and players. The jet exhaust is like a fingerprint that other players look for and can be a pilot’s saving grace or their downfall.   Figure 3 shows the game from the view of a pilot. Again the mini-map is located top left, but this time there is no health bar in the center. Pilots are informed of their health by the color of the edges of the screen. If a pilot is injured they become cloudy and red until the pilot recovers. The bottom 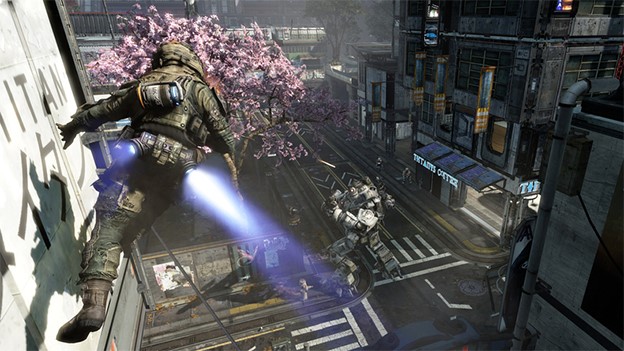 right corner shows the pilot’s titan’s cooldown instead of “core ability”. To the left is the weapon currently equipped and then the pilot’s explosives represented by a small white grenade and the letter F. Continuing to the left is the pilot’s active ability shown with a small white bar and the letter Q, and finally the game information counter in the bottom left exactly as it was in the titan. In this image the center targeting reticle for the player’s weapon is more obvious and exists in the same position regardless of whether the player is controlling a pilot or titan.

The game campaign is non-existent. The campaign consists of regular multiplayer games with some added dialogue between rounds. This is extremely disappointing considering that most FPS games have a decent campaign as well as multiplayer combat. Additionally the game is lacking significant dynamic content. There is no destruction in the levels, which makes no sense considering we have titans. There are no dynamic events or scripted events that alter the level or even give the players a sensation that a dynamic event might be locked away somewhere. Some scripting in the campaign intentionally misleads players to believe that there may be some dynamic event that can happen, but it is a farce. The game could use some dynamic mobs, events, or terrain and an actual campaign wouldn’t hurt either.